A Costly Lapse in Judgment

An allision in the maritime sector is defined as an accident in which a moving object strikes a stationary object (bridge fender, bridge deck, dock, dredging vessel, etc.).

According to the Maritime Law Association (MLA) such an accident calls the “Oregon Rule” into play. Simply put, the Oregon Rule states that “…when a moving object hits a stationary object, the moving object is presumed at fault. The moving vessel thus has the burden of proving an alternate theory of causation to show that the stationary object was actually at fault.” Good luck with that.

The issue of allision is topical again today because in recent weeks, bridge allisions have been reported on by the maritime and, in some instances, the general media after a barge-mounted crane struck a popular commuter bridge in Donaldsville, Louisiana resulting in damage to the Sunshine Bridge that officials say will cause the bridge to be closed to traffic for “…at least several months” to make necessary repairs.

And while the ‘busy season’ for bridge allisions is usually in the spring when rain and snow melt swell the rivers, this season’s unusually high rainy conditions in the upper and lower Midwest have created unusually dangerous high water conditions this past Fall.

Pre-Trip Analysis is Critical
It has always been important for river pilots to know the depth, width and height of their vessel and, perhaps more importantly, those same measurements of whatever their vessel is pushing or pulling. While those measurements are generally a constant for their vessel, the variances of the size and configuration of that day’s job are not. And while water levels change and navigable channels widen and narrow, bridge heights do not. So it’s up to the pilots to make adjustments to their calculations and safety margins according to that day’s river conditions. If that is not done, the resulting bridge allision could be the beginning of a very long and costly legal battle for the involved pilot to defend his/her license … and, quite possibly, professional career on the river.

To illustrate that point, we take you back to the story of a pilot serving onboard a towboat on a Midwest river and towing astern a 50’x50’ flexifloat spud barge. On board the barge was a deck hand and two observers. The towboat pilot in question had towed flexifloat barges previously, but it was his first trip towing this specific flexifloat spud barge. The trouble began when he ‘eye-balled’ that the spud height above the water was approximately 33-34 feet. Unfortunately, he did not directly measure the spud height, inquire about the exact height or go onboard the barge to check the height himself. What made matters worse, was the fact that these particular spuds could be positioned either all the way up or all the way down significantly changing their height depending on how they were engaged.

Moment of Truth
The pilot then commenced what was planned to be a four mile transit route requiring passage under a vertical lift railroad bridge. The bridge, which has a vertical clearance of 35’ when down and 135’ when raised, was manned 24/7 by an operator who could raise it partially or completely depending on the circumstances and communications received from approaching vessels via marine radio. Seeing that the bridge was in the down position as he approached, the pilot judged that “… he and his tow could clear the bridge with no problem.” The conditions were very favorable: daylight, an ebb current and four nautical miles of visibility.

The towboat passed under the bridge without incident but, as the flexifloat being towed was proceeding underneath the bridge, the bridge the spuds in the fully upright position allided with the lower steel beam of the  bridge resulting in damage to the spuds.

While the towboat pilot was assessing damage to the barge and attending to other on board safety issues, the bridge operator immediately reported the incident to the Coast Guard before contacting the pilot to confirm that his tow had indeed struck the bridge. The pilot acknowledged the allision and reported that the lower two bolts of the forward spud were visibly bent over but still in the well, and the aft spud well’s upper bolts were broken causing the aft spud and well to bend backwards. He further reported no damage to his vessel or, to the best of his knowledge, the railroad bridge.

The pilot then promptly reported the incident to his license insurer and was assigned a local maritime attorney to prep him for his initial ‘informal’ onsite USCG interview, preparation of the required Maritime Casualty Report (2692) and, eventually, accompanying him to his formal USCG interview.

Not much Room to Maneuver
Unfortunately, the formal USCG interview which took place a few days later was a short meeting as the pilot was promptly charged with negligence for both failing to properly check and verify the height/draft of the barge’s spuds and failing to request the bridge operator to raise the crossing on his approach. He was then offered a “Settlement Agreement’ stipulating his acceptance of an outright three (3) month suspension and surrender of his USCG license, with an additional nine (9) month probationary period following the completion of his 90-day suspension.

After debating the merits of contesting the terms of the Settlement Agreement being offered, both the pilot and his attorney agreed that, given the wording of the Oregon Rule and the absence of any valid mitigating circumstance, the most prudent, albeit painful, decision was to accept the Coast Guard offer and surrender his license.

The one silver lining was that the pilot had opted for income protection when purchasing his license insurance policy so he received his insured wages for the duration of his three-month suspension. While softening the economic impact, no amount of money could compensate the damage to his professional reputation caused by two lapses in judgment … not verifying the spud’s height in the raised position and not requesting the railroad bridge to be raised.

As today’s maritime media continues to focus on bridge allision incidents, particularly their negative consequences to the free movement of people and goods, river pilots should take all prudent action to satisfy the old axiom when it comes to bridge clearances … better to be safe than sorry. 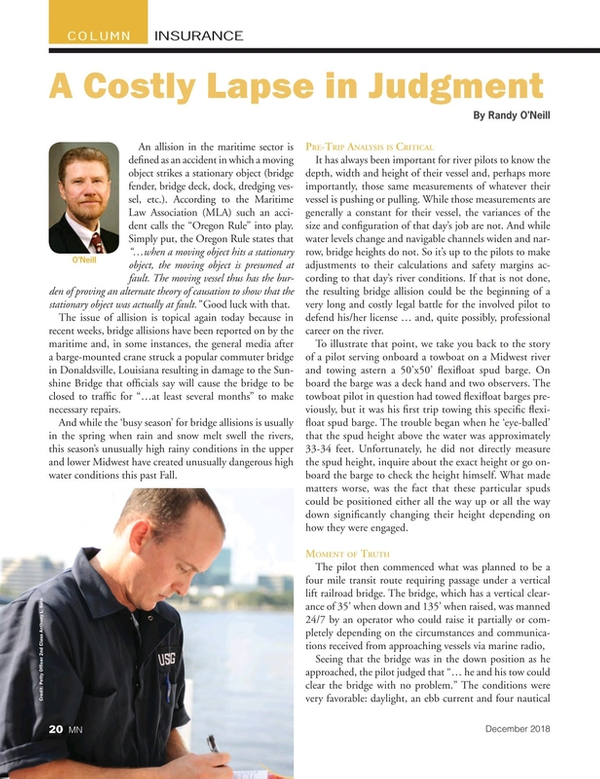 Read A Costly Lapse in Judgment in Pdf, Flash or Html5 edition of December 2018 Marine News