Propellers: One Size and Shape Does Not Fit All

Propellers are surprisingly complex devices, especially considering most are a solid piece of metal with no moving parts. The variation in vessels and operational requirements leads to wildly different designs, from noise-sensitive propellers for luxury cruiseliners to wide-blade sets for tugs. With different combinations of diameters, pitches, blade styles, and blade counts, there is no limit to the design alternatives available. Creating these different designs can be an extremely time-consuming and specialized process.
Traditionally, propellers have been designed largely by hand, with manufacturers creating wooden foundry patterns of blades. These patterns are used to create sand-cast molds for manufacturing the propellers. While the pattern can be used to produce propellers with different numbers of blades, new patterns must be created for geometrically similar variations. A given design is usually available in a number of diameters and pitches, which means that the manufacturer has several patterns. It is not unusual for these patterns to be a mixture of body filler and wood as they are modified or improved over the years. Some of these patterns were created decades ago and are still in use today.

New Considerations
A number of developments in the marine industry are changing propeller design. One development is the increase in power densities of marine engines. Modern engines have more horsepower packed into a lighter engine of the same size. As a result, these vessels require stronger propellers with more blade area to accommodate the increased power and speed. Another contribution is cost of fuel and the desire for efficient propeller designs. As fuel costs increase, there is more incentive to optimize the performance of the propeller. The availability of analytical tools including model testing, flow measurements, and CFD simulation are allowing the industry to move away from the traditional designs of the 1960’s, when known performance was prerequisite for investing in a pattern. Of course, one of the major changes to the propeller industry has been the growth of CNC machining which allows greater precision for producing patterns and finished propellers.
The propeller industry accommodates demands for both traditional and contemporary designs. Existing installations of legacy propellers must be supported because often the lifespan of the vessel is greater than that of the propeller. As a result, the original manufacturer is usually expected to have the same propeller available in the future. Clients also desire an expansion of product lines and available variants, especially for popular models. This has led to a common problem for propeller manufacturers and designers: creating a design variant from an existing pattern with no formal design documentation. Quickly creating design and size variants, whether from scratch or from an existing design, is one of the tasks HydroComp PropCad has solved for the industry.

Introduction to PropCad
HydroComp PropCad software geometrically models marine propellers for design and manufacture with automatic preparation of CAD/CAM data, 2D design drawings, 3D offsets, and thickness classification reports. Manufacturers, researchers and designers in over 40 countries use the software to quickly generate propeller designs. And, the newest version of this design tool includes three years of enhancements which both update and expand PropCad’s propeller design capabilities.
At the heart of PropCad is a library of traditional propeller designs – allowing users to rapidly develop geometries. The library has over 10 different propeller series, including B-series, Gawn, Kaplan, and cleaver style propellers. The design is controlled by individual parameters, such as nominal pitch and BAR. The parameters are matched using radial shape distributions. The radial shape distributions can come from many sources, including the provided library propellers or user-defined files. This parametric method of design allows users to mix-and-match the distribution shapes of different propellers.
Users can also set the general parameters to scale the distribution shapes to a magnitude desired for the current design. Variants can be designed simply by changing the target magnitudes. In the case of one manufacturer of small RC boat propellers, the design time for new molds was cut from one week to just a few hours. This savings is significant, and allowed the company to introduce six new product lines in one week.

Recreating Existing Designs
PropCad is also being used to interpret existing propellers, patterns, and scan reports in order to recreate legacy designs. Propeller scan tools featuring a single touch probe to measure axial drop have traditionally been used to inspect the surfaces of propellers. Today, many consumer-level 3D scanning tools using lasers, probes, and depth-cameras are widely available. This has resulted in a new practicality for digitizing older propellers and patterns, many of which have no formal design documentation and have been heavily modified over the years. PropCad utilizes data from these digitizations to recreate the propeller blades. Using PropCad ScanConverter, individual sections are extracted from the geometry to derive the distributions of pitch, skew, rake, and more. Once the existing design is in PropCad, additional documentation such as 2D drawings, pitch inspection reports, and 3D offsets are generated with a few clicks.
Many of the bumps and bruises that unintentionally became part of a propeller are exposed when legacy designs are digitized and examined with PropCad. Recreating scanned designs in PropCad offers an opportunity to improve the performance and smoothness of a design, while retaining all the flavors of the legacy propeller – allowing PropCad users to simultaneously document their designs, improve performance, and maintain market association with a particular brand and model.

Exporting designs for CAD/CAM
Because designers have a wide variety of software packages at their disposal, PropCad supports the native file types for many CAD/CAM packages, including internal data-transfer files for Solidworks, Creo/ProE, Rhinoceros, Delcam, Surfcam, Mastercam, and Unigraphics NX. For other packages, PropCad supports generic 3D transfer files including point clouds and IGES. All 3D CAD exports have been updated for compatibility with the latest versions of the major CAD tools. A new export dialog allows the user to select the exported surfaces (face/back, root, tip, LE, TE, and root fillet) and also to increase the density of the model without altering their design. Designers can therefore easily transfer geometries to a preferred environment for creating CNC toolpaths, pattern templates, or casting molds.

Streamlined by Design
Communicating the design of a propeller can be difficult. For high value projects, propeller drawings and classification society approval are typically required. The societies provide equations to govern the thickness of the propeller blade, and the rules can be cumbersome to implement by hand or with spreadsheet. These rules use the initial thickness and section areas to specify a required thickness; therefore the recursive nature of this problem requires iteration and convergence.
PropCad provides thickness classification for seven societies, including rules for controllable-pitch, ducted, and ice-class propellers. Rules for CCS, NK, and Swedish/Finish rules were added in 2014. Ice class designations are available for ABS Steel, BV/RINA, LR Ship rules, LR Naval rules, and Swedish/Finnish rules. Not only does PropCad save designers time, the final report is suitable for submission to the societies and includes all intermediate data required for these complex and time-consuming calculations. The 2D drawing, offsets, and classification reports generated by PropCad are professional and customizable with company information and logo. These reports can be exported in Adobe PDF, spreadsheet CSV, or word processing RTF formats.
Because propeller designs vary widely, it is important to designers that they have control over all aspects of the geometry. Contemporary propellers feature non-linear distributions of pitch, progressive face camber, highly skewed blades, special distributions of trailing edge cup, and more. PropCad features an improved, fully-parametric Builder that allows users to define radial distributions of parameters from HydroComp’s library propellers, from user-generated distribution files, or by entering the data directly into the sections spreadsheet. The Builder includes new options, including radial control of leading and trailing edge thickness, chordwise position of maximum thickness for segmental-type sections, and a CAD-friendly tip correction. These added settings, and others, give PropCad users an unprecedented level of control in their designs.

Updated Interface, Enhanced User Experience
Propellers can be as much as 30 years old – but propeller design software should not be. Compatible with the latest versions of Windows, the new PropCad includes substantial development of data entry and visualization metrics. As a result, PropCad has moved to a table-driven interface that allows users to quickly enter and modify data in their designs. The content of the interface has been consolidated so that principle dimensions, radial distributions, and 2D section offsets are now all visible on the main screen. A new display mode enables graphing of any radial distribution, such as chord, skew, or pitch angle. One-click graphing allows quick visualization of blade outlines, thickness profiles, and 2D section offsets. The 3D window includes hardware-accelerated anti-aliasing, smoothed 3D renders, new visualization modes, and even video recording.
Today, manufacturers are moving faster from new designs to finished products with PropCad’s streamlined CAD/CAM exports, including updated program specific transfer files and general purpose IGES output. PropCad also supports reverse-engineering of existing propeller designs as well, and therefore the industry is seeing a new generation of improved designs. That’s because when it comes to propellers, one size does not fit all. 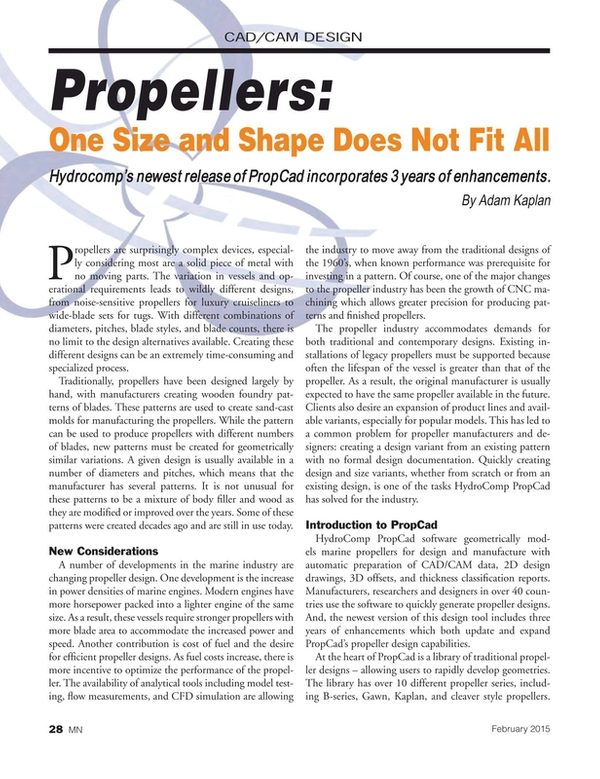 Read Propellers: One Size and Shape Does Not Fit All in Pdf, Flash or Html5 edition of February 2015 Marine News