Powering Ahead with a Clean Design

The Shearer Group and Conrad Shipyard collaborate on an ABS approved LNG Towboat Design. What happens next could change inland shipping forever.

The December announcement that Conrad Shipyard, L.L.C. and The Shearer Group, Inc. (TSGI) had worked together to develop the design of a Liquefied Natural Gas (LNG) powered 4,200 horsepower towboat utilizing a proven TSGI design was, perhaps, exciting enough on its own merits. That the team had also been awarded an “Approval in Principle” (AIP) by the American Bureau of Shipping (ABS) for the design was especially significant for the nation’s inland waterfront. Packing clean LNG power into an inland towboat was no easy task. And yet, the potential for the concept to blossom in this largely fixed, point-to-point market is very real.

Proven Technology Removes Risk
The towboat is based on TSGI’s proven azimuth drive (z-drive) towboat design that debuted in 2008. Eight of these towboats, which also pioneered the use of z-drives for brown water operations, have been built for Southern Towing Company, where significant fuel savings relative to conventional towboats have been well documented. Beyond this, the LNG powered towboat design capitalizes on Wärtsilä’s proven dual fuel technology, but is not necessarily wedded to it. This technology is the most widely accepted dual fuel technology currently in use in the domestic U.S. market. While Wärtsilä’s existing dual fuel engines are medium speed diesels, it is anticipated that future engine developments will result in lighter and smaller high speed units. The design is flexible enough to allow for the use of either engine option as determined by the operator.
The Wärtsilä system specified is a smaller version of the system currently installed on the Harvey Gulf Multi Purpose Supply Vessels. According to Bristol Harbor Group President Greg Beers, it is important to note that a conventional towboat is not diesel electric like an OSV. Diesel electric applications are perfect for LNG adoption because they allow the prime movers to run at constant speed. He adds, “We have mitigated this with our towboat design by using dual fuel engines which reduce the throttle lag, and z-dives which allow for more control at a given throttle setting. In fact to go from full forward to full reverse with a z-drive, you do not adjust the throttle setting at all, you simple rotate the thruster 140 to 150 degrees.”
Perhaps the biggest selling point for the new concept, at least from Beers’ point of view, is that the new design removes the risk from ‘early adopters.’ Asked to further elaborate on that point, Beers replied, “In two words: proven technologies. Moving to a z-drive design would be a risk for many operators on its own. By using our proven z-drive design as the basis for our LNG towboat design, we have mitigated that risk. Further, Wärtsilä’s dual fuel engines and their LNG storage and delivery system have been proven (or are being proven) domestically by Harvey Gulf and in numerous cases internationally. Our towboat employs the same basic system architecture, which has been accepted by U.S. regulators. By combining these two proven technologies, we are able to remove the design risk.”
Ed Shearer, TSGI’s Principal Naval Architect, adds, “With Approval in Principle in hand, we know that the basic design is acceptable to ABS. Further, we know that ABS and USCG work hand in hand on many of these projects, and thus we infer that the major design issues are also acceptable to USCG. That said: the next step is to submit class drawings to ABS and USCG for review and approval. We expect that USCG will limit their review to the LNG storage and supply systems, as well as fire and safety plans. ABS on the other hand will review all structure and systems.”
One of the variables that has been a sticking point in LNG propulsion – especially for smaller hulls – is the proximity of the LNG bunker tanks to the accommodations. In the case of an inland pushboat, this is especially evident. The design team got around this issue by locating the tanks in open air above the machinery space and sufficiently aft of the accommodations space. Structural fire protection is provided along with adequate buffer zones to meet Class requirements for the storage tank location.

Solid Partners: Deep Experience
This kind of forward-thinking design effort simply can’t be done in a vacuum. Collaboration was important in the design of the new towboat. Conrad Shipyard, established in 1948 and headquartered in Morgan City, LA, had a big hand in moving the LNG towboat concept forward. That’s because when building an LNG powered vessel, a shipyard must take many things into consideration. Terry Frickey, Executive Vice President Conrad Shipyard, says that experience is important. He also laid out the importance of critical learning curve items, one of which includes the piping and containment systems. “Conrad has worked with a series of piping, valve, and tank manufacturing companies in this space over the past couple years in anticipation of this product category further developing. These vendors/partners have experience in design/development and installation of their products and have been instrumental in assisting us with our vetting of this product. Since 2009, Conrad has delivered almost 40 gas carrying Type C tank barges. To extend our knowledge into the double walled requirements of the LNG space will be a challenge, but one we feel is right in line with who we are, based on our experience.”
Bristol Harbor Group and The Shearer Group together bring varied experiences that combined to enhance the project. In this case, TSGI was the principal designer of the subject vessel. That said; both TSGI and Bristol Harbor Group, Inc., have long been involved with LNG, and are currently involved in five active LNG projects. These include analyzing a subset of the U.S. Army Corp of engineers (USACE) fleet regarding its suitability for conversion to Liquid Natural Gas (LNG) and/or Compressed Natural Gas (CNG) power, and the development of a 3,000 cubic meter Liquefied Natural Gas (LNG) transport barge utilizing a Bristol Harbor Group proven hull design built by Conrad. Notably, the transport barge design has also received ABS AIP approvals.
Ed Shearer, TSGI’s Principal Naval Architect, has experience in towboat design stemming from his past employment with several of the major inland shipyards. Beyond this, Shearer is a member of the Coast Guard’s Chemical Transportation Advisory Committee (CTAC) which develops Policy Letters and Regulations for transporting and bunkering LNG as well as gas-fueled vessels.

LNG vs. Diesel: does it make sense for you?
In today’s upside down oil markets, the financial model for LNG propulsion has changed somewhat. Those changes naturally impact a particular operator’s decision process. Greg Beers explains, “Conventional wisdom is that LNG loses viability if the cost for the LNG delivered is more than 80% diesel on a diesel gallon equivalent (DGE) basis. Diesel is approaching that price now, but Ultra Low Sulfur Diesel (ULSD) is 15% to 25% more, still making LNG an attractive option. As shoreside fueling infrastructure continues to improve, the deliverable cost of LNG will only decrease for marine vessels, further incentivizing LNG as a marine fuel.”
The variables to consider don’t just stop at price, however. That’s because it takes 1.7 gallons of LNG to equal one diesel gallon equivalent (DGE = ~129,000 BTU). When stowed in cylindrical Type-C pressure tanks, the difference can be as much as 3.8 times the volume for LNG because of the poor stowage factor of the cylindrical tanks. The TSGI design mitigates this difference by placing the tanks aft, over the machinery space. Ed Shearer told MarineNews, “We believe that an alternate containment system such as GTT’s Mark III Flex system, will be more attractive for internal hull tanks when and if they are ever allowed to be placed beneath accommodations spaces. Currently, the USCG does not allow LNG tanks to be placed beneath accommodations, service or control spaces.”
The range differential for this LNG towboat design and for that of a conventionally powered vessel is about 10 days (10 vs. 20), but if the operator uses diesel in the same trip once LNG is exhausted, the range is the same. Shearer cautions potential adopters, “Burning LNG primarily (remember, with a dual fuel engine, you always burn some diesel as a pilot fuel) will make the economics most attractive, improve the environmental impact, and aid with maintenance. Gas fueled engine internals are much cleaner than diesel powered, so engine longevity and time between engine overhaul is also an advantage.”
Arguably, the use of LNG for propulsion in ferries and dedicated vessels in the Baltic is the perfect model for using it on inland waterways – a fixed route in an enclosed waterway system. Asked if LNG could someday overtake diesel as the preferred propulsion on inland rivers, Greg Beers replied, “I believe so. Gas itself is very abundant along the inland waterway system which should help keep the transportation costs to a minimum. Assuming gas continues to be adopted by other industries along the rivers (which we expect it to), the inland marine sector should be able to capitalize on this expansion.”
It is also true that the operating scenarios of Harvey Gulf, Crowley, TOTE, Washington State Ferries with their new-build gas-fueled vessels is to fuel the vessels at one location. The operating scenario for an inland service line-haul towboat would involve fueling at two or three specific locations. Therefore, the logistics of the number and size of bunkering barges as well as shore-side liquefaction facilities could drive the cost of converting or building vessels for LNG or dual fuel.
The cost premium for both Z-drives and the LNG propulsion component also has to be considered. But, the design team says those costs are tempered by the savings z-drives represent during construction. The old rule of thumb for the cost of new construction of a towboat with z-drive units adds 25 to 50 percent to the construction cost of a traditional design. But this, according to Greg Beers, doesn’t take into account the items that are eliminated from the construction cost of a traditional towboat. Along the way, many expensive man hours are eliminated from the process. He adds, “The new z-drive inland towboat will be approximately the same cost or at most ten to twelve percent more than the current construction cost of a new, conventional design, inland towboat. Actual construction cost of the Southern Towing z-drive towboats proved this assumption to be valid.”

Sealing the Deal
Ed Shearer says that the economic and environmental benefits of using LNG as a fuel source for high horsepower applications like towboats are widely understood. He adds enthusiastically, “The beauty of the TSGI design is that it marries these benefits with the proven benefits of utilizing z-drives on a towboat. These efficiencies provide an owner with combined operational cost savings that can exceed 35% of the cost of operating a conventional towboat.”
Looking ahead – and downriver – the Clean Fuels/Clean Rivers initiative to build a natural gas corridor that extends from the Morgantown area in West Virginia through Pennsylvania and down the Ohio River to Huntington, WV is alive and well. The Clean Fuels/Clean Rivers Team consists of Life Cycle Engineering, Pittsburgh, Pittsburgh Region Clean Cities (PRCC), Port of Pittsburgh Commission, Rahall Appalachian Transportation Institute and The Shearer Group, Inc. (TSGI). The ultimate goal of this effort is to expand the potential of natural gas as a replacement for diesel fuel to the inland waterways system, which encompasses about 12,000 miles of navigable waters. If and when that happens, of course, the ideal pushboat already exists. 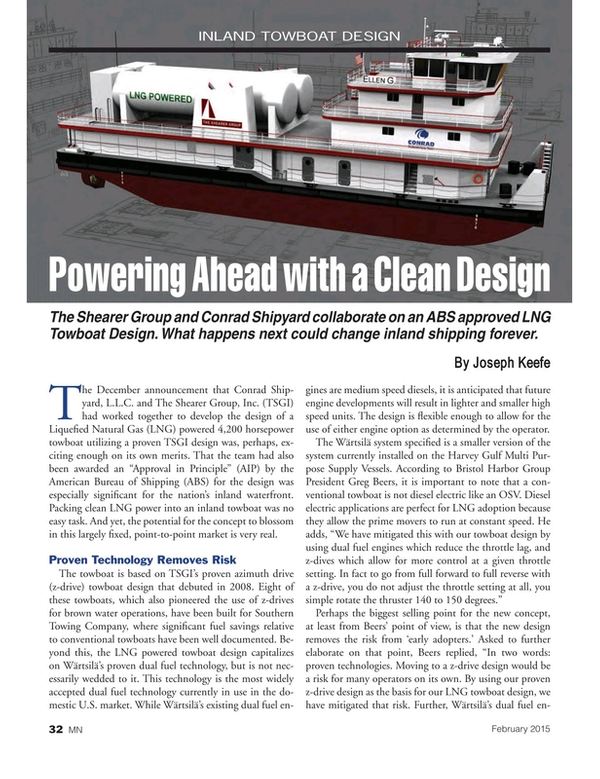 Read Powering Ahead with a Clean Design in Pdf, Flash or Html5 edition of February 2015 Marine News