A Gift to US Inland Waterways

The nation and its inland waterways received a great gift at the end of 2014. On December 16, 2014, the Senate voted 76-16 to pass H.R. 5571, tax extenders legislation that included a 9-cent increase in the inland waterways diesel user fee. The increase will be effective April 1, 2015 and funds – around $40 million from industry levies – will be deposited into the Inland Waterways Trust Fund for the benefit of priority navigation project construction and major rehabilitation.
On December 3, 2014, the House of Representatives passed by a vote of 404-17 the “Achieving a Better Life Experience (ABLE)” Act that included the 9-cent increase to the user fee. The user fee increase is the most recent key recommendation of the Capital Development Plan (CDP) to be adopted into law, with four of the CDP’s elements adopted through the passage of WRRDA.
Also, in December, the House and Senate passed the “The Consolidated and Further Continuing Appropriations Act of 2015,” known as a “Cromnibus,” (H.R. 83) with details from the Energy and Water Development and Related Agencies Appropriations Act of 2015, as follows:

These developments, on top of the enactment last June 2014 of the Water Resources Reform & Development Act (WRRDA), are big triumphs for the nation and its inland waterways transportation system. The inland rivers employ more than half-a-million people and offer the most economical, energy-efficient, and environmentally sound way to move the commodities the U.S. and the world depend upon.
This critical link in the nation’s transportation supply chain deserved these recent victories, and it will continue to deliver wins for the U.S. economy as long as we compete in the world market.


(As published in the February 2015 edition of Marine News - http://magazines.marinelink.com/Magazines/MaritimeNews) 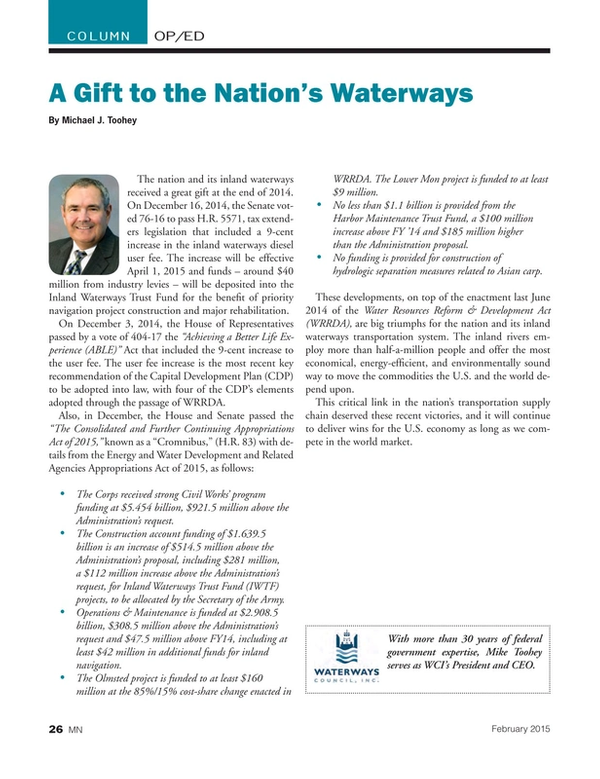 Read A Gift to US Inland Waterways in Pdf, Flash or Html5 edition of February 2015 Marine News