In 2013 alone, Rolls-Royce invested £1.1 billion on research and development while at the same time supporting a global network of 31 University Technology Centers, which position Rolls-Royce engineers at the forefront of scientific research. Today, Rolls-Royce predicts that Ship Intelligence will be the next major transition for the shipping industry as ships become ever more complex. As that happens, managing high levels of data in order to operate on-board systems will be a big part of that reality. At first, says Roll-Royce, this will better manage propulsion and navigation systems. Later, it could potentially lead to autonomous vessels.
The first step towards that lofty goal was taken in December by the VTT Technical Research Center of Finland, together with Rolls-Royce, as they jointly unveiled their latest vision of Ship Intelligence – a futuristic ship’s bridge concept which could become reality as early as 2025. Rolls-Royce VP of Innovation Oskar Levander told MarineNews in January, “We are system integrators.” That said; a first glance at their oX Bridge concept reveals that they have already accomplished so much more than that. Rolls-Royce worked together with VTT’s researchers and Aalto University to develop the new bridge, known as the Future Operator Experience Concept or ‘oX’. It features smart workstations, which automatically recognize individuals when they walk into the bridge, and adjust to their own preferences. Beyond this, the windows of the bridge serve as augmented reality displays of the vessel’s surroundings, including visualization of potential hazards that would otherwise be invisible to the human eye. The system can, for example, pinpoint sea ice or tug boats and other craft that may not be visible to the crew.
The real change, according to Levander involves how the system brings up data for the user. He explains, “We provide the right information, for the right user at the right time,” adding, “It’s a more interactive experience between the anchor handling tug and the rig itself. Using ‘augmented reality,’ where everyone shares the same information, the goal is to not to overwhelm the user, but instead give them the data that they need and can handle.”
This Concept oX Bridge, says Levander, shows the market what they are doing in a similar way to that which auto manufacturers sometimes roll out a ‘concept car.’ And, while the oX bridge might not be ready for a few more years, many of the features of this control system are already in use. For example, the platform supply vessel “Stril Luna” in August became the first vessel to enter service using Rolls-Royce’s Unified Bridge. That vessel has begun a long-term contract with Statoil and other operators have ordered the system for their fleets.
Complete with touch screen displays, the system incorporates a common interface for all equipment. For all users and equipment – the interface looks the same and feels the same, integrating different systems into your bridge systems. For comparison, older tanker mates may remember the standardized cargo control rooms of the old Sanko crude oil tankers, where any experienced Chief Mate could walk onto any of the company’s tankers and immediately begin operations. The unified bridge concept takes that practice to another level.
Levander told MarineNews that the new oX Bridge concept is part of a logical plan. He says, “The Unified Bridge was first, and then, the oX Bridge is the next level up. Eventually, this will lead to remote control. Yes, you can look to the eventual reduction of the number of crew, but at the same time, you also need to remove some functions because reduced crews are already overwhelmed.” Those functions, he says, can be accomplished remotely or from shore, adding, “Ultimately, we will try to create an unmanned vessel.”
According to Levander, the oX Bridge will be likely be attractive to megayachts, but will also appeal to the commercial markets, as well. All of this is part of Rolls-Royce’s efforts towards improving ‘ships intelligence.’ Eventually – and this could happen within the next two or three years – Rolls-Royce will test an unmanned remote controlled vessel within one country’s waters and, of course, with a flag state’s approval.
Beyond the oX bridge, remote monitoring of equipment on board ships is also advancing, and Rolls-Royce has control centers in Norway and Finland, where many ships and thrusters are already monitored in real-time in operation around the world.
Oskar Levander says simply, “We are investing in ship intelligence, which will be a major driver of the next transition era of shipping. Much in the way that sail gave way to steam powered ships, and coal gave way to oil, we will see increasingly sophisticated ships, highly automated and perhaps even unmanned remote controlled, plying the seas within the next two decades.” www.rolls-royce.com 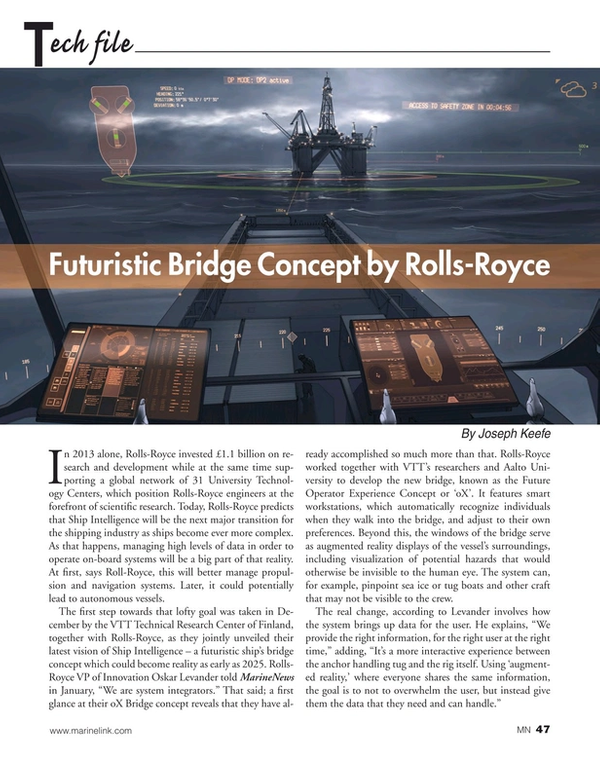