Shortly after Florida Marine Transporters CIO Don Carlton installed an electronic records management system for Kimberly Hidalgo, the tow service company’s head of Compliance, he suspected there might be other department heads interested in the new software. But, when Hidalgo’s department cut dozens of hours every week from staff time spent pulling paperwork from rooms full of filing cabinets while also automating complex administrative operations with the new system, Carlton knew all department heads would be interested.
“So, we decided to go big with Laserfiche ECM,” Carlton said, referring to the new system. “I didn’t appreciate where this technology could ultimately take the company, but now that we see the way it is unfolding, we’re not thinking about where it can be deployed next, but when.”
Twelve months ago, when Florida Marine purchased RIO – the most comprehensive system Laserfiche offers – it originally opened it to just 25 of its 1,000 employees. Today more than 200 employees are logging on in the company’s three largest departments: Compliance, Dry Cargo and Fluid Cargo. With another 75 employees expected to be up-and-running by the end of the year, Carlton is now pushing to have the system working companywide as fast as possible.

FMT Embraces ECM
Florida Marine’s decision to move into electronic records technology was in part prompted by the sheer volume faced by Hidalgo’s Compliance Department. With Florida Marine’s 80 tugs and 200 barges pulling or pushing petroleum products through the country’s most challenging rivers and channels, Compliance responds to a flood of records requests from client auditors and government regulators. It was expected that converting those rooms full of paper records into electronic images would be an enormous time saver because those images could then be instantly accessed from anywhere from a centralized computer server.
However, the system also came with added software features that Carlton was eyeing when originally negotiating the RIO contract with national Laserfiche reseller Complete Paperless Solutions. For example, the system’s Workflow module offered the company the capacity to automatically forward all those Compliance Department records to auditors and regulators upon request. No more pulling, copying, scanning, emailing or snail-mailing paper files for Compliance Department staff. “We had no idea that we could so reliably automate multi-step administrative functions,” Hidalgo said. “It gave us a whole new prospective on what this technology can do for Florida Marine.”
That perspective can best be summed up as the difference between electronic records management, the technology Florida Marine was originally looking to adopt, and enterprise content management, the technology now being rolled out throughout the entire company. It’s the latter concept that Complete Paperless Solutions, (CPS) introduced to Florida Marine, Carlton says.
Instead of just turning paper records into electronic images for increased ease of access, enterprise content management uses software to move those digitized documents throughout an organization, turning the manual passing of paperwork from person to person to the computerized flow of information from decision-maker to decision-maker. It not only allows for email alerts for those decision makers, it has security features that can be automated to accommodate changing access requirements, automated indexing for ease of filing when those electronic images are archived, and automated document destruction schedules at the end of the required lifespan of those archives.

Beyond Compliance: logistics & operations
As the new system successfully navigated the channels in Hidalgo’s Compliance Department, it was expanded next into the company’s Fluid Cargo Department. Florida Marine specializes in transporting oil and gas industry-related cargo, so nearly every moving part and flowing fluid on each of the barges and tugs it operates is monitored around-the-clock. As those tugs and barges pass through the most crowded shipping lanes in the country, their movements are also closely monitored. Inspection reports on all aspects of those operations are a daily routine that is now increasingly being automated at Florida Marine. “If you do inspections on boats now, they automatically get routed to the appropriate people without someone having to make the decision of who gets what,” Carlton says. “We’re no long relying on somebody physically routing these records, the system does all the routing and filing for us.”
Taking advantage of other software modules in the new system, all the forms those inspections fill are now available on tablets carried by ship staff or port captains, eliminating another enormous source of paper from Florida Marine’s operations. This is opening the door to taking the nation’s third largest in-land tug and barge services company completely paperless, in what is one of the world most paper-laden industries, Carlton says. “We used to have cabinets and cabinets full of paper. We were killing trees by the thousands,” he says. “Now we have all the forms electronically, weather on computer or mobile device. They are all right there. No more printing them out and carrying them around.”
That’s why Carlton wants the system installed companywide as soon as possible. Florida Marine’s training department and its vessel maintenance yards are being sized up for the system, as are accounts payable and personnel. Deck hands, tankermen, and captains are all expected to make use of the system. The speed of the roll out has been greater than either Carlton or Hidalgo expected, and training has been training required for officers and staff in each of the departments. Carlton credits Complete Paperless Solutions with its ability to get department heads comfortable enough with the new system to move their staff onto it and start building workflows of their own.
CPS credits Florida Marine with understanding early the potential of the system and being aggressive in rolling it out once they felt comfortable using it. “It’s unusual to see a project move so fast, but they are pretty doggone good over at Florida Marine,” says CPS president Tom Ziencina. “Caution is important when making a move like this but when Florida Marine got the hang of it, they had the institutional knowledge to rapidly expand it throughout the company getting a much quicker return on their investment in the process.”
Carlton says being willing to delegate and get staff directly involved in the process has been a big part of that. Weekly training sessions with CPS have enabled staff in Human Resources to build their own workflows involved in the new-hire on-boarding process. Hidalgo estimates Florida Marine has about 40 workflows in place now and there does not appear to be any facet of operations that can’t, in some way, be streamlined through the new system. Still, Carlton says, the company is taking it step-by-step.
“We’re taking very fast steps,” he says. “There’s so much that we can do, now it’s just a matter of making sure that we get the maximum benefit available from the system from each department before we move onto the next department.” That includes the boats. Five of Florida Marine’s vessels have Laserfiche installed into on-board computers allowing them to share with land-based operations real-time information on the activities of each. However, the vessels still rely on cellular communications networks to transmit ship-board data and in some of the farther reaches of the Mississippi watershed, service can be spotty. That has Florida Marine considering prospects of one-day using ship-board satellite communications, but that may not be coming as quickly, as so many other aspects of Florida Marine’s operations are being lined up for conversion to the new system.

Real Utility, Real Savings
“We started out saving hundreds of staff hours every month and we might now be saving that every week,” Hidalgo says. “It’s been transformational for us, and while it’s been just a year, we’re starting to wonder how we ever got along under the old paper-based system.” The transformation has not escaped the attention of the family-owned business which has expanded almost as rapidly as the new Laserfiche system. Last year alone, Florida Marine commissioned four new tugs and one of those vessels, the M/V Kimberly Hidalgo, is scheduled to be christened in December. No doubt, when it is delivered, it will be that much more efficient, with the help the Laserfiche ECM system. 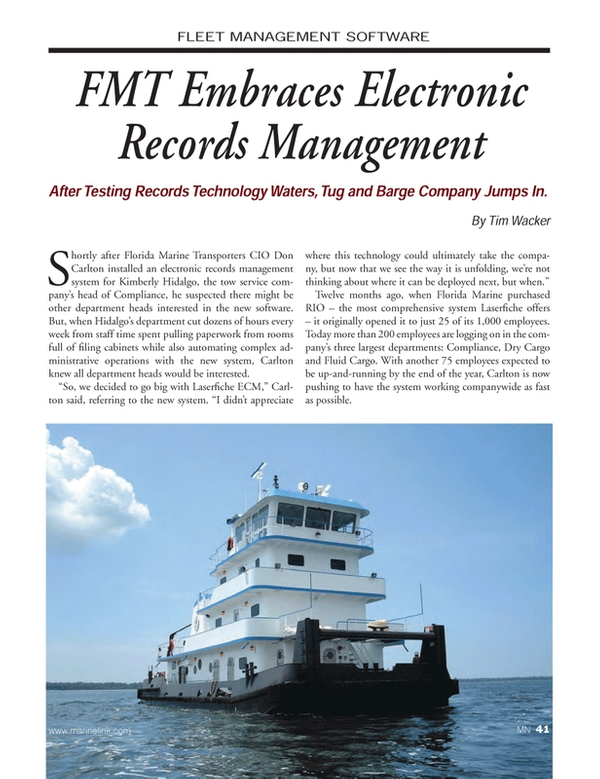