A Tailored Approach to VSAT for Workboats

ESSI Corporation and Hughes team up to address the unique requirement of this hardworking maritime sector.

When ESSI Corporation and Hughes teamed in 2009 to deliver broadband VSAT services to the workboat industry, they quickly discovered that not only was this a unique industry, but also that when it came satellite communications, several important requirements had to be satisfied to keep these customers happy. As a service provider, a customized service tailored to those needs evolved.
According to ESSI Corporation’s Emil Regard, offshore workboats and OSV’s first and foremost demand a certainty that the bandwidth ordered will be available, anytime, especially in the worst of conditions. Secondly, the transparency to view bandwidth usage in real time in order to make informed decisions about how much bandwidth is needed at any given time had to be a standard service. Finally, contract terms had to be consistent with the workboat market itself. All of that is easier said than done – but, apparently not impossible.
As ESSI fine tuned its offerings to the offshore sector over the course of the next few years, the market also evolved with it. That’s because as corporate IT organizations began using the VSAT link to push applications and content to the vessels, it became more difficult to frame the bandwidth need in terms of speed (i.e. 128kbps X 256kbps), and Workboat companies began to demand more applications to help increase operational efficiencies and reduce costs. In answer to all of that, ESSI, in concert with Hughes, assembled a service package that is perhaps as unique as the niche markets that they now serve.

Who is ESSI?
ESSI services more than 3,500 structures in the Gulf of Mexico and provides Supervisory Control and Data Acquisition (SCADA) via VSAT. To be sure, however, ESSI Corporation is not new to the offshore sector. It has serviced the offshore energy market for over 20 years, and along with its parent, Hughes, introduced Hughes Maritime Broadband satellite communications services to the workboat market about four years ago. As their client base grew, it did so in every region of the world, from the Gulf of Mexico to Brazil, Mexico, Southeast Asia, the Middle East, and Africa and in Europe, too. ESSI’s customers include three of the top five companies in this market. In an industry with a lot of competition, they set out to differentiate and provide more than just internet and voice packages.
With Hughes as the well-funded and reliable parent and the Hughes Maritime Broadband network at their disposal, ESSI is arguably the perfect service provider and conduit to the maritime customer; utilizing U.S. built Hughes hubs and modems, selling to end users and providing tier one and two support. For those who buy these services strictly on the basis of price, Emil Regard contends that the buyer gets exactly what he pays for. And, he concedes, “Although we have competitive pricing, we haven’t won any business yet on being the low cost provider. We’re mid-range in that respect, but customers enjoy a high level of trust, service and reliability with ESSI and our equipment.” And in a business where many companies spend just $300 to $700 monthly per vessel in a highly controlled situation, that’s saying a lot.

OSV Operators Look Deeper
Companies looking for high power Very Small Aperture Terminal (VSAT) services often discover that they are told that they are paying for and receiving a certain amount of bandwidth, but is very often oversubscribed. Because workboats often toil in close proximity to one another, ESSI was the first to introduce – followed by others now, to be sure – guaranteed bandwidth. And to make sure that customers get what they pay for, ESSI proves it by allowing customers to have access to their hub. Regard said that it goes much deeper than that, however. “Customers like that we can and do integrate engineroom monitoring, voice and data services. For example, we can help them do monitoring and trending that will incorporate alarms at set intervals if something isn’t right. And, this is something which clients increasingly want.”
Regard knows that no offshore company has static needs. Boats get laid up, or more are added. Customers need to have flexibility to add bandwidth for software and or engine room monitoring needs, or subtract, if necessary. Regard said, “if a customer has to lay up a boat, then they can scale down their plan in terms of bandwidth. After all, if the boat is not working, we’re not getting paid. If it is, we are. This policy operates within reason, of course, but it illustrates just one more aspect our commitment to this market.” Finally, says Regard, if an antenna fails, ESSI will install an Iridium and/or Inmarsat replacement unit to tide them over.

Not Just Bandwidth: a Wider Menu
The ESSI/Hughes value-added menu is a wide one now. Now fully evolved for the demanding, increasingly sophisticated offshore markets, the breadth of services now available make it clear that VSAT providers must do much more than just provide bandwidth and data services. ESSI’s offerings now include:

Vessel Mapping
This global service, developed by ESSI, tracks the precise location of a vessel and maps it on a web accessible map (including a lease block overlay in the Gulf of Mexico). It shows vessel Latitude and Longitude to four decimal places, speed (knots) and heading, updating every 15 minutes. The service records this information in history for up to one year.  History shows the path and heading of the vessel over time. For fleets; the entire fleet, or sub sets such as regions, vessel types, or customers can be shown in separate groups with independent log in credentials.
Deck Vision:  This global service, developed by ESSI, adds a snap shot of the back deck each time Vessel Mapping records position data.  A thumbnail view of this appears on a call out box in the “Map View”, and lists the photos in “Current Status” mode.  The vessel can be monitored for safety and logistics management. For many customers, this is an especially desirable feature. Shoreside personnel can see a snapshot photo of what’s happening on deck. With the click of a mouse, operators can see if the deck is fully loaded. Can one more stop be made to maximize the inbound trip? Beyond this, the use of safety equipment can be spot-checked. Unsafe conditions can be spotted in almost real time and eliminated.

Engine Monitoring
This service, developed by ESSI, provides temperature, pressure, RPM and fuel information for remote viewing from anywhere there is an internet location.  Users can see the most recent poll of information or request a real-time poll of all information including alerts.  The system also produces historical graphs to show macro trending over time. The timing and management of the data can be customized and is independent of engine make or model.

Enterprise Package Delivery (EPD)
This web-enabled content broadcast service, developed by Hughes, transforms any maritime VSAT network to a private broadcast network. EPD can be used to deliver any kind of content, such as security software updates, safety or equipment manuals, charts, training videos, etc. EPD allows the user to set up broadcast groups and schedule data for delivery to any PC or device on the vessel and can even attach an executable command. Overhead bandwidth is used to ensure normal operation is not affected by the broadcast.  EPD reports successfully delivered content and will rebroadcast until each package is delivered in case a vessel is not on the network. Instead of sending out thumb drives, or CDs and waiting for crew changes; or multiple point-to-point connections, vessel operators can use this one simple tool to control content over large fleets.

Content Filtering
This service applies corporate internet use polices to the vessels.  It can be created by region or vessel and can be changed at anytime.

On Demand Streaming (ODS)
ODS is a technology unique to Hughes Maritime Broadband that “reserves” bandwidth for any identifiable application. It is the next higher level of bandwidth management as compared to “Prioritization” or “Guaranteed” bandwidth. ODS reserves a private Committed Information Rate (CIR) immediately upon recognizing a voice call, video stream or other application. ODS reserves the CIR for the entirety of the connection. This ensures that the most important and critical applications are completely uninterrupted or affected by other traffic on the network.

Change the Conversation:
Traditionally, Workboat companies had to choose internet plans based on speed, like 128 kbps X 256 kbps, to determine the amount of satellite through-put needed per vessel. Network schemes like contention ratios or sharing make this approach difficult or at least unreliable since most VSAT providers program network sharing ratios differently. ESSI and Hughes have pioneered two ways to combat this: one is to have a very low contented network, and dedicated bandwidth options, to ensure all vessels can access the bandwidth they need, anytime they need it; and by providing real time network access to “see” the bandwidth usage by vessel, and local area network (LAN) on the vessel. The other is a new way to allocate bandwidth, and that is by “response time” of applications, not just bandwidth.  A response time for an application is easier to define how much bandwidth is needed and at what contention/sharing ratio. In essence, the customer should not have to worry about the bandwidth allocation or sharing policy.

Evolving Markets, Happy Customers
Although the ESSI customer list is a long one and reads like a “who’s who of the maritime offshore business community,” Emil Regard prefers to keep that knowledge largely under the Radar. Nevertheless, and in March, David Cantu, Vice President of IT at Houston-based Black Elk Energy Offshore Operations, LLC told MarineNews, “We needed more than VSAT, we needed a way to increase the efficiency by which we managed the fleet.  We wanted to see the vessel loads in near real time to assist in logistics decision making.   A VSAT solution that included precise vessel mapping and integrated photos of the back desk was critical to our decision.   The ESSI Deck Vision solution coupled with the Hughes Maritime Broadband service helps us operate more efficiently than ever.”
Lee Johnson, SVP & Chief Information Officer at GulfMark Offshore echoed those remarks when he declared, “At GulfMark, we were interested in more than just VSAT for internet and voice service, we are looking for new applications to enhance operational efficiency and safety. GulfMark is reviewing applications such as engine monitoring, document synchronization, global mapping & redundant fail-over by leveraging VSAT’s value proposition. This helps increase the value of the investment GulfMark has made in the overall solution.”
For offshore service providers, the increasingly sophisticated nature of doing business is driving the need for more bandwidth and VSAT services, packaged attractively and with real utility. Emil Regard, recognizing today’s offshore conditions and also alluding to the comments above, finished by saying simply, “The buyer is now much more sophisticated now in the offshore markets. It is typically not the office manager anymore; it is corporate IT. And because that’s where Hughes came from and who they have always dealt with, both ESSI and Hughes like where the market is evolving.”

(As published in the April 2013 edition of Marine News - www.marinelink.com) 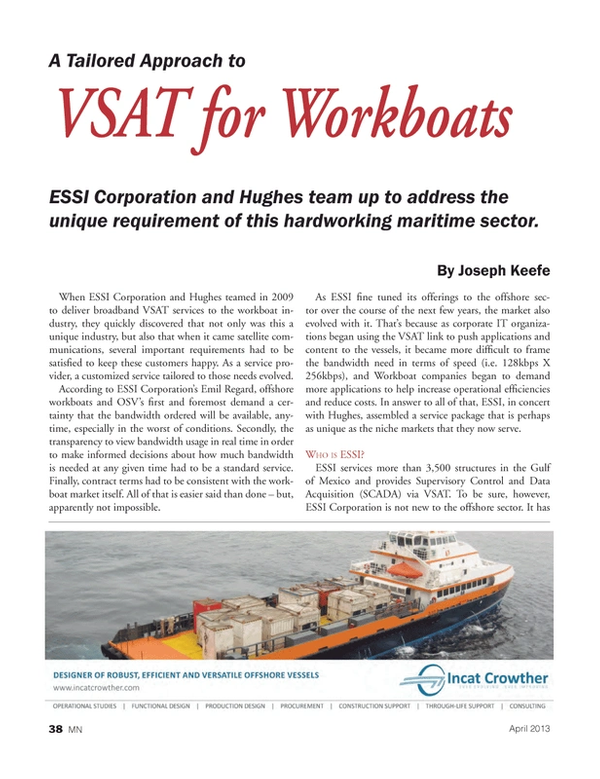 Read A Tailored Approach to VSAT for Workboats in Pdf, Flash or Html5 edition of April 2013 Marine News

Other stories from April 2013 issue